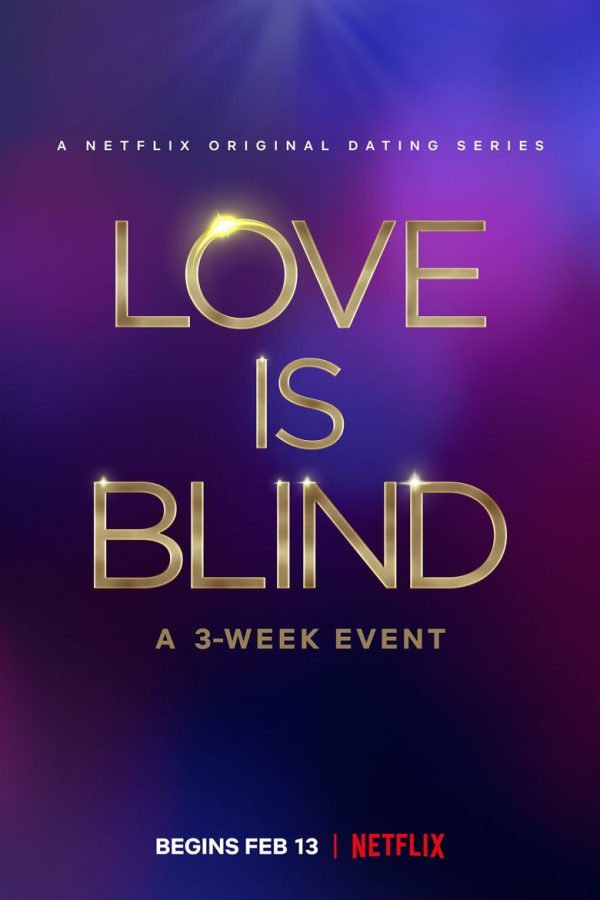 As the old saying goes, “love is blind,” and some couple’s swear to this. However, this show takes that phrase and turns it into reality. “Love is Blind” is one of many new reality shows that Netflix has released this year. It is a “finding your true love” type show, but there is a catch- you can’t see them.

The concept of the show was to see if “love is truly blind” and through this experiment 30 participants were able to test this idea. The group was split between men and women, 15 on one side of the facility, and 15 on the other. There, they spent their time sleeping and resting. The rest of their time was used to “date.”

Between them were “pods.” Through this, two participants would be able to communicate and spend time together. The only thing holding them back was the physical aspect. This way, they couldn’t see what each other looked like and they would have to form emotional connections.

Inevitably, some people knew that looks mattered to them and couldn’t form any real relationships. So at first, I wasn’t really interested, and I knew that there was a good chance that nothing binge-worthy was going to happen. Nonetheless, the show did what it intended to do, get you hooked. After each person got to meet each other, they started to open up to those they liked. Throughout the days, it seemed as if these people had been together for months and were ready to propose to each other. And so, some did.

The show continues through a 30-day span with the end goal being a wedding. After they get engaged, they get to leave the pods, and the clock starts ticking. They get to meet each other and live their lives together. This way, the effects of the physical aspect of relationships should settle in and they should be confident in their love. They go on a vacation, move in together, meet the parents, and get into fights.

The show seems like a good idea, but it’s the intense problems and insecurities that kept me on my toes. The couples are on and off. Some reveal secrets that their partner fears and some seem more into the other couple’s fiancé than their own. To be honest, it’s low-key dark.

The idea of proposing is a life changing decision, and to do it without ever seeing the other person is even crazier. In theory, it’s meant to form the strongest emotional bond, but I don’t think that is enough justification. After seeing the couples meet each other, some were completely shocked and some ended up not being able to “put a name to the face.” They had spent hours a day talking to someone coming up with their own idea of what they looked like, only to see something completely different. Few passed expectations, most failed. Consequently, the physical attraction was absent causing a lot of problems within their relationships. It’s sad just to see it, let alone live it.

However, the main problem I had was it’s addictiveness. Now don’t get me wrong, an addictive show means the show is doing well, but the problem was the thing that made it addictive.

At first, you’ll be watching the show, telling yourself it’s nothing crazy. Then, half way through the show you won’t be able to wait to see what happens next- who will reject the other when they found out their secrets or who will still get married despite all the signs against it. Finally, you get sucked into their lives and problems and can’t step away.

Personally, I finished the show wondering how and why I had just watched this. It was annoyingly addictive.