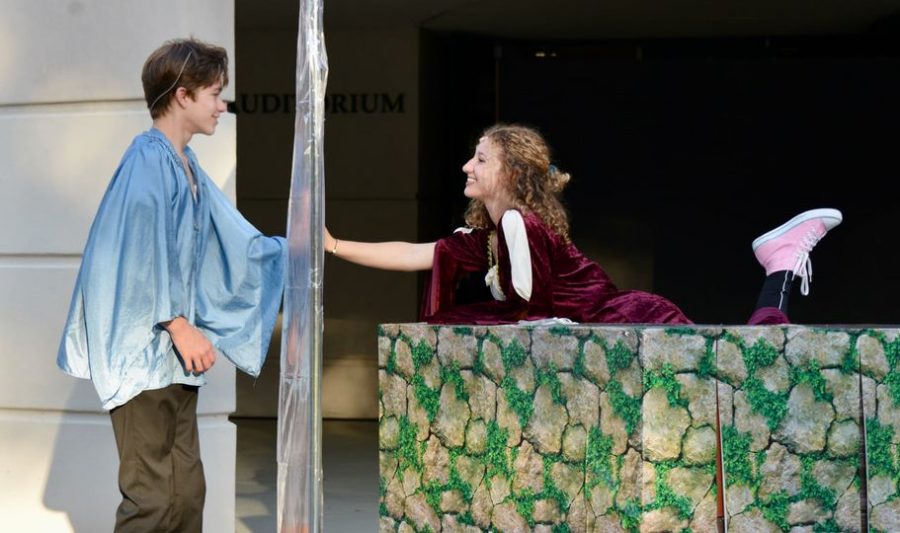 Paris’s breath shortened and his sight hindered. Romeo’s sword pierced through his side; his knees fell to the ground, and he knew his seconds were numbered. Before he could speak his last words he was interrupted by someone saying, “Hand Sanitizer break.” The Covid Compliance Officer, senior Molly Halladay-Glynn, stood with her six-foot pool noodle to her side, watching as the actors sanitized their hands.

“Romeo and Juliet”, the classic Shakespearean tale, has been retold for centuries. A tragedy of two lovers, Romeo and Juliet, whose feuding families, the Capulets and the Montagues, prevent their marriage. While performing a play during a pandemic, the cast faced new experiences and changes but braced through them head-on. Trinity Prep’s “The Socially Distant Shakespeare Company Presents Romeo and Juliet” is filled with flash mobs, coronavirus satire and uncontrollable weather; the first upper school production of the school year was not short of a success. The play ran through November 5-8.

“Romeo and Juliet” has been known as a tragedy for over 500 years which is a long period of time for a play to be tragic, and Trinity Prep’s actors decided to give it a twist by making it a comedy.

“The script for the play was initially written by Ms. Walker and I,” senior Ellie Watson said. “We took Shakespeare’s original script and added in original jokes and gags. We were honestly writing as we went. Each time we encountered a scene, we would as a cast think up ways to make the scene comedic. It was a group effort all the way through.”

Due to the pandemic, tickets were paid for virtually and it was heavily advised to bring in lawn chairs as the play was performed on the steps on the Quad. Each actor was required to wear a clear mask that was only taken off when they had a spoken line.

“Holding the play outside was rather new, but I honestly didn’t mind it at all,” Watson said. “It felt much less intense than doing it inside, which worked out well because it was a comedy and was supposed to be lighthearted anyway.”

The play began with Watson introducing the cast, in which she explains the events of 2020. She jokingly introduced the troupe which had braced through the Australian wildfires of February, evaded the outbreaks of COVID-19 in China and New York and finally made their way to Florida. The actors suddenly appeared and scurried around the Quad in utter panic. The stage manager, junior Isabel Tongson, tried to keep them under control. The troupe awry carried on as the play was filled with actors forgetting lines, corpses coming back to life and even Tik Tok dances.

Watching the play, I felt as if I had never heard of Romeo and Juliet before. Shakespeare’s presence was faintly present as the actors included their own interpretations of their characters. Juliet, played by junior Layla Kaplan, was the opposite of Shakespeare’s original character who was: elegant, pure, and delicate. Instead, she was the total opposite of Shakespeare’s Juliet. Romeo, acted by junior Dalton Joseph, was an overt actor who accidentally drank hand sanitizer, causing him to be unconscious. The stage director, Tongson, played his role while he layed in distress.

While rehearsing the play, the actors were made to deal with Florida’s inconsistent weather patterns and the burden of the pandemic.

“We had to distance, wear masks and even rehearse outside in the heat,” Watson said. “It was more difficult than other years for sure but only because it was so different and new. No one had ever tried to produce a play in the same vein before.”

Trinity Prep’s “The Socially Distant Shakespeare Company Presents Romeo and Juliet” amused its audience with its many pratfalls. The play’s inclusion of modern-day life allowed for a more personal and genuine touch. There is no denying the hilarity of the cast left the audience with a humorous and unique experience.