How Face Masks Have Impacted Musical Theater and Choir 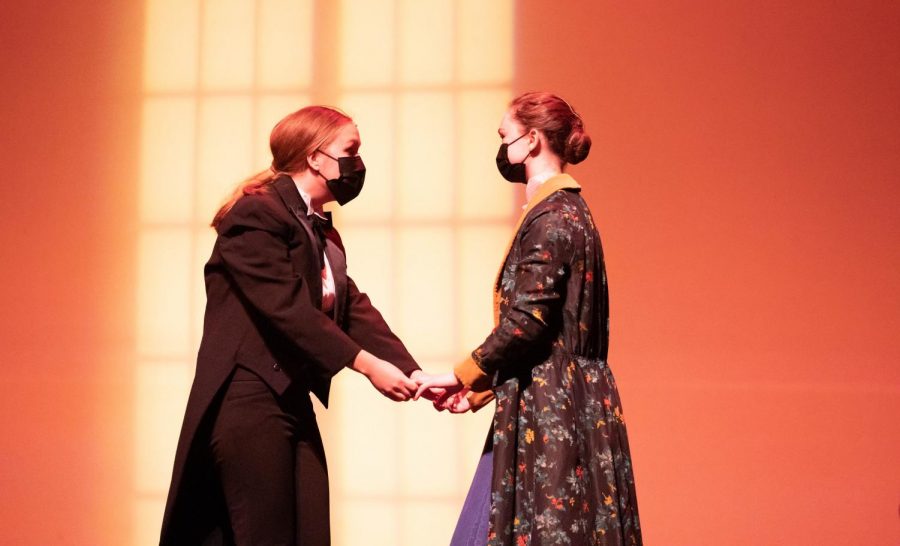 On March 10, 2020, 60 people attended the Skagit Valley Chorale rehearsal in Mount Vernon, Washington, with 45 emerging ill and two dead. Three days later, Trump announced that COVID-19 was a national emergency, and it soon became clear that events like the choral rehearsal can become superspreaders  since COVID-19 is transmitted via air particles. Various precautions, including wearing face masks, were implemented since then. The little rectangles of fabric, polyester, and cotton are notorious for not only preventing the spread of air droplets but sound as well.

While most courses have had to adjust to hyflex and social distancing, classes like chorus and musical theater have an added difficulty when it comes to face masks. According to the American Speech-Language-Hearing Association (ASHA), masks weaken sound by 3-12 decibels and create low-pass filtering of high-frequency sounds, resulting in difficulty understanding speech and higher-pitched voices.

“We’ve been successful, though, with going outside,” Papin said. “To be able to social distance and then take masks off so there can be more of a connection between scene partners.”

Choir, however, has chosen a different method in altering classes due to COVID-19. Seventh grader Aristides Bakamitsos, who sings in the select choir, made note of the changes.

“Classes got smaller,” Bakamitsos said. “We actually split into two classes … Select Choir is in third and fourth period.”

The way the singers learn songs and music has also been affected. According to Bakamitsos, there have been fewer days to work on music, rather than several days due to the new schedule. Navigating around face masks while still singing clearly during class has still been a struggle.

“You have to sing louder to get the volume through the cloth,” Bakamitsos said. “It’s also hard with your diction because you don’t want to take off the mask.”

Choir and musical theater both require expressing emotions. However, conveying feelings has been challenging both in acting classes and even in social situations. Papin believes there is a way around this, though.

“You have to make up for the lack of energy that comes from your face and your expressions with your body,” Papin said. “There’s a lot you can do with your eyes. That’s all the audience is seeing, raising your eyebrows and paying attention and opening your eyes wide.”

Choir has their own techniques to improve their singing skills while still abiding by COVID-19 precautions and guidelines.

“We have singing masks,” Bakamitsos said. “And then we have this technique where if you’re in a regular mask, you can kind of just push it a bit forward. So you’re still protecting everyone else.”

Including remote students during activities and projects has been a hurdle for both fine arts courses. Remote students have often noted that they feel unheard during class by their teachers, and teachers have found it challenging to communicate with those students.

According to Papin, all students must provide and receive feedback from each other, so she often has one student with a camera to show the remote students what is going on in class while also making sure they are paying attention.

Papin herself has experienced difficulty with doing musical theatre while wearing a face mask. According to Papin, she did two shows with face masks and struggled with getting air without sucking in the mask itself.

Despite different methods to keep students interested and engaged while staying safe in class, Papin has had to cancel some shows.

“We’re not doing a big musical this year,” Papin said. “Because we would involve, you know, upwards of 20, 30 people. And there’s just no way to social distance.”

Choir has followed suit in cutting back on the larger shows to properly social distance all the singers, with choreography limited, and microphones requiring sanitizing after every use, according to Bakamitsos. Some choir concerts and shows were performed outside, but that presented even further issues.

Not all hope is lost though. Productions and concerts will continue, even if they are different.

“You know, last semester, we performed everything outside,” Papin said. “This semester, we’re trying to bring in some of the small shows.”

These tumultuous times have called for change from all different aspects of life. But Papin is positive for better times.

“I’m hoping that at some point in time,” Papin said. “You know, we can all gather together.”