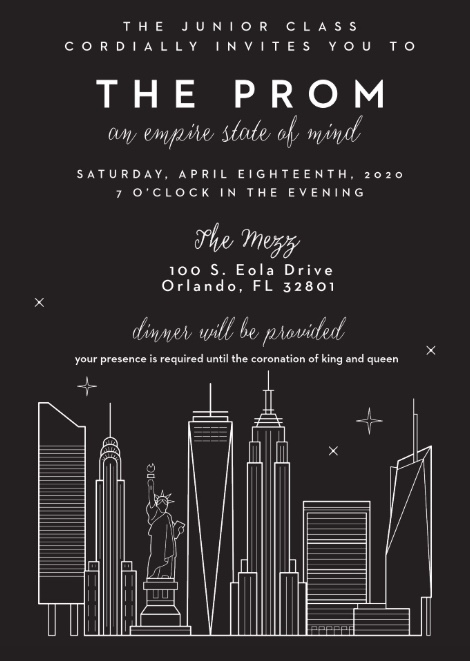 The Original Prom Invitation for 2020 Prom. Courtesy of Ellie Watson

This year, the COVID-19 outbreak has forced the cancellation of many of Trinity Prep’s most anticipated events, and one of them is prom.

“The administration made the decision to cancel this year’s prom after looking at a number of alternatives, but it is not foreseeable that we will be able to assemble a large group and be in close proximity through the spring,” Upper School Principal Patrick Mulloy said in his email announcing the cancellation of prom.

Originally planned for April 18, 2020, the prom committee was forced to postpone prom ever since they were notified that school would be canceled until May 1st.

“I made the Prom announcement on March 11, and by that time I didn’t think it would get canceled,” Prom Chair Ellie Watson said.

Ever since the date was postponed, the primary focus of the prom committee was to still host the event in some way.

“I feel it’s really important to still have this event in some capacity so that students don’t miss out on every tradition in their senior year, and also so students can get together and have this one last event that they can have with their [friends] before they get to college,” Science Teacher and Prom Committee Faculty Advisor Emily Massey-Burmeister said.

Prom is a moment that almost every high school student awaits for. It gives upperclassmen the chance to celebrate their high school career and enjoy the night off with their friends with music and food.

“I think it brings everyone together in an environment where it’s unlike anything you can get at school, while still being with the people you know,” Senior Class President Benji Santiago said.

It’s a staple of high school and is one of the final steps from graduating high school.

“I think it’s a traditional high school experience, a rite of passage, where you can go out and hang with your friends,” senior Bhrajit Thakur said, who was looking forward to going to prom this year for the first time.

Watson and the Prom Committee started their project last May, just a few months after her election as prom chair.

“We really started planning for prom in the summer, in order to get everything running for prom you have to hit the ground running, or you’re going to run out of time in terms of scheduling,” Massey-Burmeister said.

They have spent 11 months planning, organizing, and budgeting to make the event as special as possible.

“I wanted to give something back to my peers, especially the seniors,” Watson said.

This year, the prom committee planned on resolving some of the issues last year’s prom had faced. Watson said that students last year attending prom had some trouble figuring out where to sit and had a hard time accessing the website to book tickets. So, they planned on fixing problems with the seating arrangement last year and made booking prom tickets more accessible online, all to make the event run smoother.

Watson and the prom committee planned on having a New York-based theme called, “An Empire State of Mind.” This year’s prom was going to be held at The Mezz, a 7,000-foot venue located in downtown Orlando.

“It’s like you’re up on a skyscraper and it fits with the New York theme,” Watson said.

On top of all this, they planned on having New York-themed food like pigs in a blanket, black and white cookies, and even a steak station.

With the recent confirmation of the cancellation of prom from the Trinity Prep administration, students have begun to acknowledge and accept the given circumstance of not having a prom.

“I feel like in this situation we’re in, it’s so unique, in the sense that it’s never happened before, and with everything that’s been stripped from us, we just have to accept it,” Santiago said. “There’s no one to blame, and of course, it’s really disappointing with the thought of not having that experience ever, but it’s entirely understandable.”

While the coronavirus has changed how we live our lives in many different ways, it has also made students realize that rare opportunities like prom should not be taken for granted.