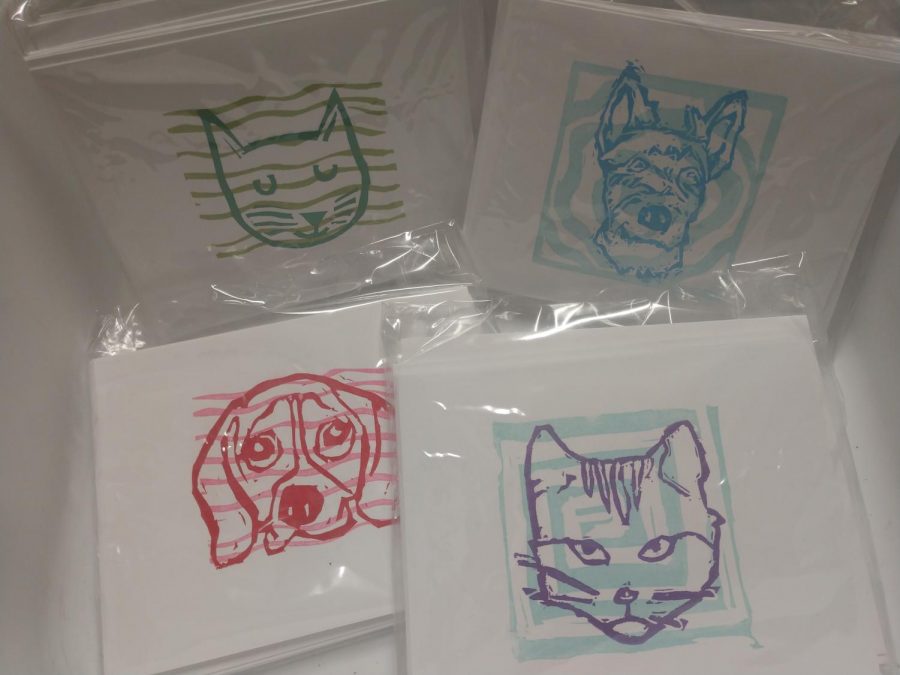 On Sept. 15, Pet Alliance of Greater Orlando experienced a tragic fire causing the loss of 17 cats due to smoke inhalation. They suspect the fire was caused by an electrical problem and are working to rebuild the shelter. In response,  The Orlando community donated a significant amount of physical products including pet food, towels, etc. Pet Alliance is now asking for monetary donations due to receiving more than enough supplies.

“We are asking the public to please refrain from sending any additional physical donations (pet food and supplies) until we are able to sort through and organize what we have,” Pet Alliance of Greater Orlando’s website said.

Fine Arts teacher Kymberley Moreland-Garnett and her print-making class heard of this tragedy and wanted to raise money to help rebuild. They chose to make cat and dog note cards for sale with all of the income going to Pet Alliance of Greater Orlando.

Their debut sale sold out in 12 minutes and is continuing to flourish. Once their next package is finished they will have nearly $1,000 to donate.

“We now have a backorder for I think 42 more sets,” Moreland-Garnett said. “So if we can make all the prints and get everything packaged up we’ll have almost $1,000 to donate to the Pet Alliance.”

One of Moreland-Garnett’s students who is particularly passionate about this project is 7th grader Kinsley Wood.

“I thought this was an amazing idea to make the cards for the pet alliance to raise money,” Wood said.

In addition to raising money, the notecard production became a fun class activity. Each student’s notecard is different colors and different breeds.

“It was interesting to see how everyone’s [notecards] came out and how the different perspectives of the animals would look on the cards,” Wood said.