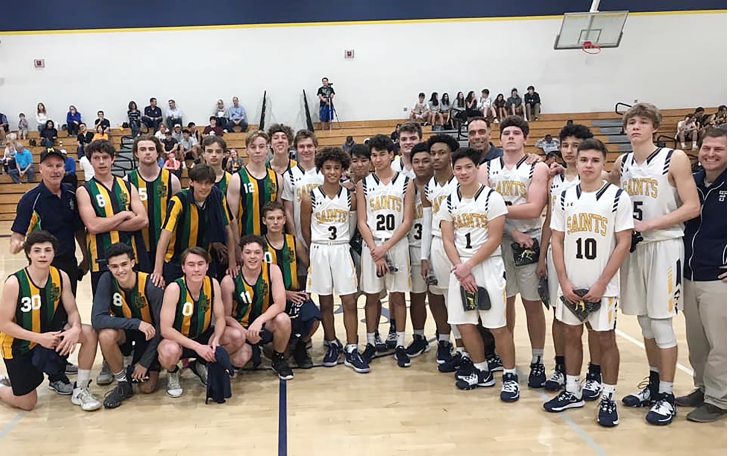 Trinity Prep and St. Kevin's College from Melbourne, Australia pose for a picture after exchanging gifts prior to their game on Jan. 3, 2020.

Any sports fan could tell you that gift exchanges have nothing to do with basketball. However, on Jan. 3, the Trinity boys varsity basketball team found themselves participating in a gift exchange at midcourt prior to their home game against St. Kevin’s College, an all-boys school in Melbourne, Australia. The Trinity players received beanies with a kangaroo pictured on the front, while the St. Kevin’s College players received Trinity basketball T-shirts. Following the exchange, the players remained at mid court as the American and Australian national anthems were played.

In addition to the pregame schedule, the game as a whole was unusual for everyone involved because of the uncertainties that come with playing a foreign team.

“As far as basketball goes, I didn’t know anything about them,” Trinity varsity basketball head coach Anthony DiGiovanni said.

Despite being unable to prepare for the game, DiGiovanni told his team to be themselves and continue to play the up-tempo style of basketball that they had found success with throughout the season. As a result, the Saints dominated the game and won by a score of 72-58.

“They weren’t used to the speed and physical nature of the game, but they could still shoot the ball,” DiGiovanni said.

Due to the fact that Trinity was playing an international opponent, the game did not count towards their ranking, so the players used the game as a chance to continue to grow and develop as a team.

“No matter the opponent, it’s always fun when we get to go out and compete at home,” junior Colby Wiener said. “Although we were playing an unfamiliar team, we didn’t look at the game any differently. We just played our game and as a result, we pulled out a win and continued to get better as a team.”

Overall, the game gave both teams a rare opportunity to interact with students from halfway around the world.

“Obviously there are cultural differences, but they’re just like us and they like to play just like us, so I think the game helped with building cultural awareness,” DiGiovanni said.

In addition to coaching his players on the court, DiGiovanni saw the game as an opportunity to teach a valuable life lesson that was bigger than basketball.

“Having compassion as humans is important,” DiGiovanni said. “It helps to break down barriers between the people on the other side of the world because it allows you to put a face on them. At the end of the day, they’re people just like us.”