Running Up The Rankings

Entering the season, Boys Varsity Soccer Head Coach Ray Sandidge set high standards for his team. He believed that they could be very successful, making a deep run in the playoffs, and even hinted at the possibility of a state championship. Now, with the majority of the season already played out, the team looks like they could do just that.

So far, the team has been playing just as Sandidge had hoped, with a current record of 10-1-1. As for their ranking, the team is top 50 in the nation for all classifications and third in the state for their classification.*

Junior Caio Marques, starting goalkeeper for the team, believes that a large amount of this success can be attributed to the players’ commitment to the team, playing for each other as well as their coaches.

“In years passed, we played individually,” Marques said. “This year we play for each other, working together to achieve the same goal.”

This aligns with Sandidge’s coaching style, helping the team play better together and further develop their chemistry.

“The boys have really bought into what we are teaching,” Sandidge said. “Most importantly, our players play for each other and have a great team-first attitude.”

If this success on the field continues, Marques believes that the team can achieve its goal of being district, regional and maybe even state champions.

“We can really see our potential a lot more this year, and our record and rankings shows that,” Marques said. “We definitely have a chance to be title contenders.”

Regardless of any success on the field, it is evident that fans love to see them play. At home games, the stands are packed with fans eager to watch the match. This is a huge step up from years passed.

“They’re a fun team to watch play,” junior Addison Torres said, who has been at every home game so far this season. “It’s a really cool environment to be in.”

Junior Marco Malabuyo, starting midfielder for the team, believes that this home game atmosphere helps the team step up their game.

“It’s a lot better when playing in front of a big crowd,” Malabuyo said. “You can feel the energy, which hypes the team up even more.”

The Saints finish the regular season on January 29, and begin tournament play on Feb. 4. Hopefully, the team will carry this energy with them to the playoffs and make the deep run that both Sandidge and the players know they are capable of.

“With the energy and unity that the new coach brings, I know we’ll make it far,” Marques said. 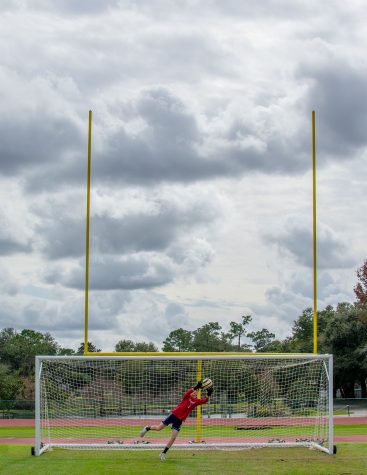