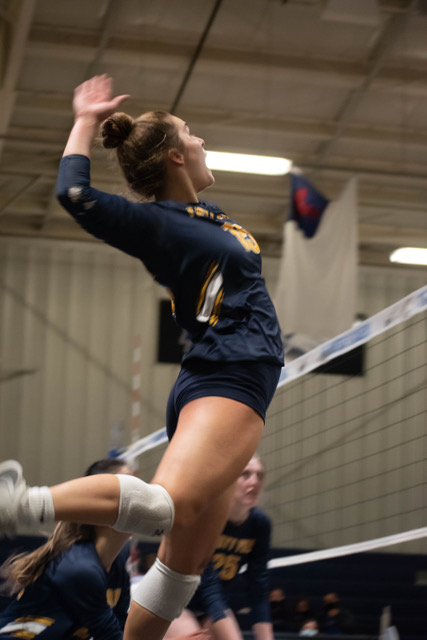 Senior Jordan Hardy spikes the ball over the net to win the point. She helped lead the volleyball team to a victory over Orangewood in the district championship on October 15.

The crowd cheers as junior Jordan Hardy spikes the ball over the net to win the point. What most fans didn’t know was that this was more than just a point for Hardy. In that moment on October 7, 2019, she broke the record for the most kills by a Trinity Prep volleyball player, but this wasn’t new territory for Hardy.

Hardy started playing volleyball when she was 8 years old and soon found a love for the game. Unlike many other sports, volleyball has a mix of competitiveness and teamwork, which is what attracted her to the sport.

“I like how volleyball is still a competitive sport, but it involves a team aspect,” Hardy said. “Being part of a team is what makes the sport fun for me.”

Hardy joined the Trinity Prep varsity volleyball team as just a 7th grader and has been a key player on the team from that moment on. Varsity Volleyball Head Coach Terri Kruczek started coaching the team when Hardy was a sophomore, and knew she was unique from the first time she saw her play.

“I knew she was a special player from the moment I saw her at practice,” Kruczek said. “She had the ability to read where the ball was going. When some players got stuck on their feet, she actually met the ball.”

The ability to read a play before it happens is not common in high school volleyball players, but it is a skill that Hardy has acquired over her time playing the sport. Hardy said that her experience playing two different positions helps with her ability to read the other team and help her teammates on the floor.

“I am able to read what the other team is doing before it happens,” Hardy said. “That ability helps me understand what each position needs to do in order to win the point. I can give that information to my teammates to help them succeed.”

Another quality that makes Hardy a unique volleyball player is her leadership on the court. Athletic Director David Langdon said that Hardy is a leader and a great competitor.

“She’s just an exceptional competitor and a joy to watch from a spectator perspective,” Langdon said. “Not only is she a good player, but when you come watch her play, she’s a leader with her actions.”

Hardy’s leadership and experience on the court earned her the position of captain for her senior year.

“She is the captain of the team, the leader, the most experienced player,” Kruczek said. “Her commitment to the team is unmatched.”

Kruczek and Langdon aren’t the only people to notice Hardy’s potential on the court. According to Hardy, multiple Division I colleges expressed interest in her, and a handful of them offered her a scholarship to play for their school. Some of those schools include Bucknell, Georgia, Texas, Virginia Tech, Virginia, Miami, and the University of Southern California. Princeton also expressed interest in Hardy.

Hardy was faced with a very tough decision on where she wanted to continue her volleyball career, but then decided to commit to Bucknell. Hardy said that the reason she ultimately decided to commit to Bucknell was because of her connection with the team’s new head coach, who knew Hardy from the recruiting process as the assistant coach of Princeton.

“I was talking to Princeton at first, and then the assistant coach of Princeton’s volleyball team became the head coach of Bucknell,” Hardy said. “And since I had a really strong connection with him from the recruiting process, I chose to go to Bucknell.”

Hardy is excited about what the future holds for her and is thrilled to continue her volleyball career at Bucknell University. She is now leading the varsity volleyball team to a winning record, and said that she is looking forward to finishing out her senior year by bringing home a regional championship.

“I am looking forward to competing with my team this season,” Hardy said. “And I can’t wait to see what we’ll accomplish together.”