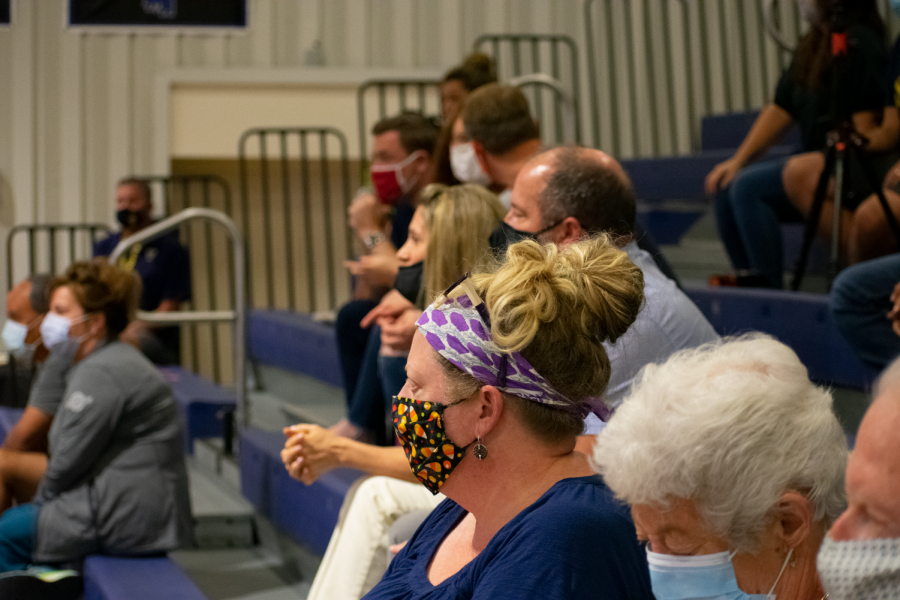 With new protocols and in-person guidelines, the Athletic Department has worked hard to provide the best experience possible for students and families attending or streaming games.

Major changes include new online options, a new ticket app, limited seating, and many other adjustments.

“There’s only a certain amount of people we can have and what we’ve decided is to give priority to the people participating,” Athletic Director David Langdon said.

According to Langdon, Trinity is staying consistent with other members of the Citrus League, a newly created league aimed to make a safe return to sports. Rather than letting just anyone show up, the school has allowed two tickets per active participant for most sports including football and volleyball. This allows the athletes to invite family or friends of their choice to watch them compete.

Trinity has also taken extra precautions on campus and added fleur-de-lis markings on seats in the gyms and the stadium to make sure fans stay safe and distanced.

There has been much emphasis on finding an alternative to live attendance. Since the start of the year, all sports have been live-streamed, whether that be through a Youtube link or another source. This gives students and families the chance to show their support even when they are not able or not allowed to attend games in person.

“All of the Citrus League is using an app called Ticket Spicket except for when playoffs start we’ll switch to GoFan,” Langdon said.

Ticket Spicket is a free downloadable app that Trinity and other schools in the league decided to use in order to make attendance easier and safer. It allows fans to access tickets on their phone and check into games without hand-to-hand contact. According to Langdon, this has been one of the positives of this situation. The school had been looking for a good virtual ticket, and this has sped up the process.

“This forced us to [find a ticket app] earlier, and I think it’s going to be a good thing,” Langdon said. “[It’s] definitely something that [will stay] with us moving forward.”

When teams move forward to the playoffs, they move out of the Citrus League bubble and fans will download GoFan. Similar to Trinity’s online ticket app, the Florida High School Athletic Association is using this app for tickets and game access.

According to Langdon, the process has been challenging, but it has fortunately been a success so far this year.

Working with the other school and communicating with other athletic directors has been key. Following similar attendance, guidelines have allowed teams like the volleyball team to get as many games as possible within their league and move onto districts and now even states.

According to Langdon, the future of live athletics remains unknown, but the athletic department will continue to require social distancing and masks, maintain a limited access policy and provide live streams as the school moves into the winter sports season.

Although all of these policies are not ideal for the players or even the fans, Trinity will continue working to create a safe environment for sports on campus and new ways for fans to show their support.

“We’re trying to be creative and come up with new ideas, although of course, it’s not the same…But at least we’re playing, and playing safely,” Langdon said.