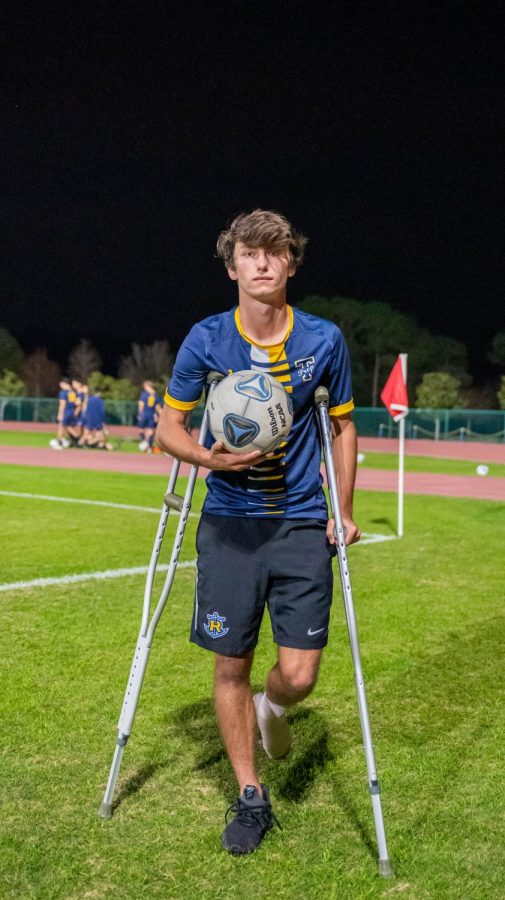 As Senior Charles Ahl dribbles down the field, he sees a defender in his way. He quickly maneuvers past him and sinks a goal, giving the Saints a lead against Hagerty. The crowd goes wild and the Saints go on to win the game 3-1, improving the team’s record to 3-1-1.

“It was a well played game by the team because we all did our part and knew what we had to do to beat them,” Ahl said. “It was also at home so our student section was there to cheer us on, which helped us out.”
Ahl committed to Stetson University on November 11, 2020 and this is his first year on the Trinity Prep soccer team. Ahl has been playing soccer for about 15 years.

“I started playing because my older brother played and I just kept working at it and have gotten to where I am by always working hard, trusting the process, and being patient,” Ahl said.

Ever since he started playing, Ahl says he loves going out to the field and pushing himself to get better. Ahl has also been working hard to make sure he is ready for his college career by making sure his skills are ready to be taken to the next level.

“I have been making sure I’m staying conditioned and I have been training everyday because I have to make sure that I am in the best shape I can be in for the college competition,” Ahl said.

Although it is his first year, Ahl has stepped up as a leader on the team. He  has received high praise from his coach for being a leader and always working to improve his game.

All the players knew he was a good player when he came here, so he already had a built in respect from his teammates,” boys varsity soccer coach Ray Sandidge said. “In my opinion he is probably the best player in Central Florida and even one of the top few in the state and he has gotten to where he is by being a hard worker, by not taking any days off, and he doesn’t goof around at practice.”

Ahl says he is excited to go to Stetson next year and play for their team. This is a big opportunity for him to keep pursuing his soccer career.

“I am just really excited to play with the boys and have a lot of fun doing it because I have worked very hard to get to the position I am in,” Ahl said.

Ahl and the varsity boys soccer team are currently 6-1-1 and have been crushing their competition. Out of their six wins, five of them have been by more than two goals. Their largest victory came from TFA who they beat 7-0.

“Our focus has really been on being disciplined in our play because we have the talent, but we need to get a lot of the little things right, which is what separates the good teams and the great teams and we have the potential to be a great team,” Sandidge said. “We have all the skills, size, speed, and a ton of experience that we need to compete for states.”

Sandidge has been making sure his team is working towards their goal at states and the players have also bought into this goal and are set on accomplishing it.

“I think we have a really good team this year and I think we have a very good shot to compete for states,” Sophomore Ryan Avallone said. “Making it to states has been one of my high school career goals and it would be amazing to do that this year.”

The Saints came up short last year in the postseason, losing to Lake Highland in the regional quarterfinals. Many of the players this year are looking to come back from that this season.

“It really hurt losing last year especially because it was against our rival Lake Highland and because all of us had worked so hard to get this far and we came up short,” Avallone said. “I think this year with the right mindset, we can go far into the postseason.”

The Saints are on a path to success so far this season and it looks like it is only going to get better. The players and coaches say they have all been working hard together for their goal of states this year and hopefully their hard work pays off.