Movin’ up to Improve

Freshman arrive for the basketball program 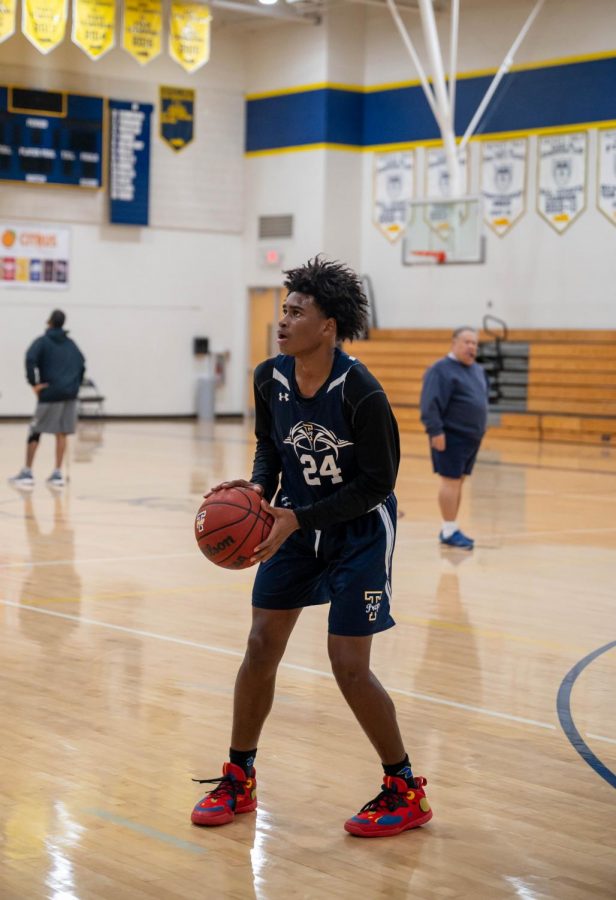 Freshman Demerius Williams practices plays and works on drills during varsity practice to improve his skills for the JV basketball season.

After playing against Trinity’s middle school basketball team in 2019, Ingram said he was interested in joining Trinity.

“Trinity Prep has always been a school under my radar,” Ingram said. “After touring the school a couple of times while getting to meet the teachers and coaches, I knew Trinity was the perfect fit.”

From having discussions with their parents and previous coaches, both Ingram and Williams thought Trinity would be a perfect fit for each of them both academically and athletically.

“I can confidently say that the coaching staff here at Trinity provides each player with anything they may need to improve and reach their goals,” Ingram said.

Williams said he and Ingram quickly bonded and have great chemistry on the court.

“That’s [Ingram] my brother,” Williams said. “I know I can rely on him on whatever, on the court and as a friend.”

When finding out about Ingram and Williams’ story, senior Jevon Bennett was able to connect to their story on a personal level.

“I was new [to Trinity] my freshman year so I know it’s kind of difficult, not knowing a lot of people at the school, but me being here can help them adjust to the school environment, especially in basketball,” Bennett said.

As a “big brother” in the basketball program, Bennet is able to help them adjust to the speed of the game and to balance the workload from school and practice.

“It’s good,  they’re freshmen and me being a senior, me being able to show them the hoops and teach them how to play at a varsity level,” Bennet said.

“​​I’m very excited about the freshmen right now … Garland is probably the most coachable kid you’ll ever see … Demarius is the most active,” Hudson said. “He’s charismatic, he’s always smiling. And he plays hard.“

With their JV season approaching, Hudson plans on training them by having them do many group activities with the varsity team. Because the varsity team went into the regional final playoff last year, he expects the team to help the freshmen advance in their skills on the court.

“Our schedule is tough,” Hudson said. “We set it up that way, so we can get prepared for the districts and the region. So we don’t expect any easiness we expect them to come out as hard all these other teams because they know we’ve got great players.”