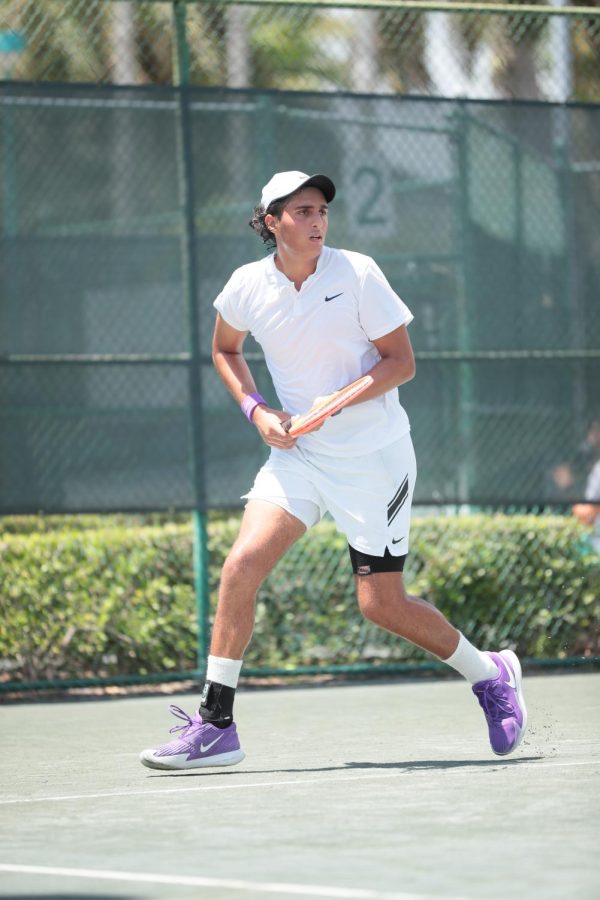 Kian Vakili sets up to hit a forehand in a summer tournament.

Senior Kian Vakili sets up for match point in a third-set tiebreaker at the U.S. Tennis Association (USTA) National Championships. He serves the match-winning ace while parents, coaches and spectators cheer. Winning is not new for Vakili, but being celebrated as the best U18 boys tennis player in the country is a moment he will never forget.

Vakili first touched a tennis racket when he was only 3 years old and immediately fell in love with the sport. Fifteen years later, he still holds the same excitement when stepping foot on the court.

“Tennis is my life, it’s my passion,” Vakili said. “I train every day for three to four hours and play in tournaments almost every week. It means a lot to be able to compete with the best in the world.”

Vakili has trained with many coaches throughout his tennis career. He now practices at the USTA national campus with Head Tennis Professional Tina Lee. Lee began coaching Vakili four years ago and has seen massive progress in all aspects of his game, especially in his technique.

“In tennis, you don’t work more on one thing than another, you have to kind of work on everything,” Lee said. “For Kian, it was just a lot of pushing him to the higher level, especially with his footwork and committing to each rally.”

Tennis is a sport that requires heavy conditioning and practice, but what makes it even more difficult is the mental aspect of the game. During a match, players are out there all by themselves without coaches or teammates to guide them. Vakili deals with the stress and pressure by remaining positive even when he is down in the match.

“Obviously, there’s a lot of things going on when you’re playing a match,” Vakili said. “I have a mental coach that helps me deal with that side of tennis. I have a lot of rituals that can help me when things are not going my way. I just try to stay calm and not get too negative.”

According to Lee, what sets Vakili apart from the thousands of other players in the country are his height, size and touch. Kian is taller than most tennis players his age, making him a very tough competitor for opponents.

“He is extremely talented, he has an amazing touch and he’s a very good competitor,” Lee said. “His main strengths I would say are just being able to feel the ball and being mentally strong in the moments when he needs to turn the match around.”

Vakili began getting recruited in July of 2020 in the midst of COVID-19. The pandemic affected his recruitment process significantly, forcing him to tour campuses and facilities exclusively on online tours and zoom meetings with coaches.

After receiving interest from many NCAA Division I programs, Kian committed to play tennis in college at the University of Pennsylvania (Penn). He is looking forward to competing against some of the best collegiate players in the nation. Vakili said the school’s academics and top tennis program are what made his choice clear.

After college, Vakili looks to earn a top-notch education at the Wharton business school and ultimately go pro in tennis.

“My plan is to do four years of college and then hopefully go pro,” Vakili said. “We’ll see how it goes, but that has been a dream of mine for as long as I could imagine.”

Being a four year starter in college is a likely possibility for Vakili, who has already impressed coaches at Penn with his talent. Men’s tennis head coach at Penn David Geatz believes Vakili will excel during his time playing at the collegiate level.

“We are expecting big things from Kian,” Geatz said. “When I was recruiting the top juniors in the nation, Kian really stood out with his tremendous ball striking ability, huge forehand serve, as well as a nice feel for the ball. I have high expectations for Kian to be a 4-year starter and the Ivy League freshman of the year.”