The Duality of Us: “Us” Film Review 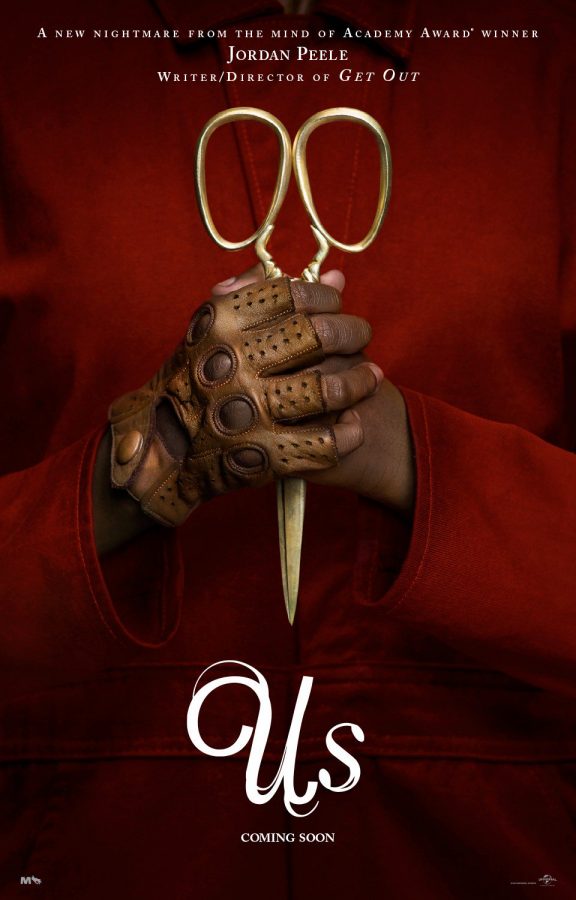 *SPOILER ALERT! If you wish to not have the film spoiled to you, watch Us and then return when you have finished.*

Jordan Peele was one of the most unpredictable faces to break into the horror genre when he released his smash debut Get Out in 2017. Formerly a member of the comedy duo Key and Peele, he proved himself to be an adept horror auteur and storyteller by creating a smart social horror film layered with shocking plot twists, hidden interpretations and smart commentary on racial ignorance and the stigma behind familial relationships affected by race. With Us, however, he seems to craft the film as a straightforward horror-comedy, putting a greater emphasis on attempting to scare the audience instead of discomfort them with blunt themes. Us follows a family of four who take a vacation to Santa Cruz and must save themselves as they are terrorized by their doppelgängers, the Tethered. On the surface, it is a film about a home invasion that goes horribly wrong, but he weaves in commentary about various social issues to make the audience think deeply about what they are watching. Because of the approach he is taking with the film’s structure, he is able to create a more ambiguous story that is able to be molded into whatever interpretive lenses you decide to watch the film through next.

Unfortunately, this can come at the expense of a more captivating experience like Get Out. The film itself has an interesting enough premise and details to keep me invested for a majority of it, but when taking these details out of the conversation it isn’t an effective horror or comedy. There are frequent moments in the middle of a suspenseful moment where a character will crack a joke or a funny scenario will occur and it feels inappropriate for the moment. Similar to its awkward comedic elements, the horror doesn’t really work most of the time either. While Peele reduces his jumpscares significantly from Get Out, which incidentally was its biggest flaw, the stock sound effects and schlocky score are more horrendous than horrifying in the long run. The second act drags, mainly for these reasons as well as the less-than-intelligent sequence of events in which a Tethered will chase its counterpart and vice versa, without much thematic depth behind it to keep me engaged.

In addition to these elements that hinder the potential this film has, it’s not as narratively compact as Get Out. The problem here is that Peele is trying to say too much at once as vaguely as possible. The contained suburban setting of Get Out worked because Peele was able to develop a tightly layered story that felt like everything was plotted out and well conceived from the very beginning. However, Us suffers from its ambitious concept that does not address its various plot-holes within the script. Some of them can be addressed in conversation and theory about the film itself, but in no way is it addressed in the film. This wouldn’t normally be a problem if the film did a better job to show more ambiguity, after all I love a good cryptic story like Burning and It Comes at Night just as much as the next guy, but the causes, reasons, and motivations for this doppelgänger invasion are laid out in an expositional monologue from the main antagonist at the climax of the film, making it difficult to interpret theories that might contradict themselves and leads the audience to rely on indefinite solutions for answers.

However, Peele knows what he is trying to say and there are moments of greatness in his directing within a flawed work. The cast, for one, is remarkable, made more memorable by dual performances from nearly every actor in the cast as their characters and their vengeful counterparts. Lupita Nyong’o takes the reigns as Adelaide, a disturbed mother protecting her family from unknown invaders and Red, the leader of a clone uprising. The genuine fear she feels and evokes in her respective performances drives existing tension to the forefront, makes the film easier to sit through in moments of boredom. She is able to produce such raw emotions through subtle facial expressions and vocal inflection to successfully be both terrifying and terrified. Winston Duke is also wonderful portraying a carefree father, and some of the funniest moments of the film come from his performance. The child actors are good for the most part, although the boy’s human character at times feels emotionally vacant despite his clone acting the same way intentionally, and the girl’s human character can sometimes be over-the-top and dishonest. Sometimes the Tethered people’s speech can come off as unintentionally goofy and not all that scary, but overall, they are intimidating villains.

Peele loves to play with subtle details that add to the rich atmosphere of the film. It is layered with lines that have double meanings, images that are not explained but add more meaning to events, and characteristics that make other characters stand out after the film is over. An image that stands out is a bird’s eye camera angle of the family walking along the beach, with heavy shadows walking along behind them at the beginning of the film. Something this subtle can explain and foreshadow the end result and provide an eerie sense of ominous dread. Other motifs and symbols are the red jumpsuits, the scissors, and the Hands Across America campaign. The plot twist at the end of the film (while in practice does not work to the films benefit due to obvious plot holes) explains the terrifying symbols and recurring images by revealing that Red and Adelaide switched places as children and the “Tethered” is the real human trying to break out of the underground by starting a clone rebellion. The last thing she was wearing was a shirt with Michael Jackson wearing the red jumpsuit from the Thriller short film and music video, which explains the costume choices.

But by far, the most captivating aspects of Us, and what makes this film worth seeing more than once, are its themes and how they can represent more than what meets the eye. Some theories about the film’s true intent speculate that the doppelgänger invasion is representative and critical of the US government and Donald Trump’s rise to power, a metaphor for homelessness and the class divide in America, and how the government is currently handling its immigration policies. While I believe all of these to be true, I personally like to look at Us as an examination of self and the duality of man. This helps address some plot holes, as the plot twist involving Adelaide’s body swap would not make sense without examining it in this way: humans are led to believe that they are the heroes and anyone unfamiliar or a threat to our lives are the monsters. But what if Peele is trying to say something about the situation in which a monster is created? When first examining the film, I found myself struggling with the fact that the motivations of the protagonist and antagonist didn’t make sense if their parts were switched, as I no longer felt much sympathy for the person we were first introduced to. But this mindset has changed for me due to the fact that the character we’ve been following escaped from a tragic situation and made a happy life for herself with children she still protected until the very end. In viewing this film in a way that ignores the film’s logical inconsistencies, much more pleasure and enjoyment can be found.

While I do believe this is not a strong film from a technical standpoint, I think it’s one worth seeing for its strong social commentary, its hidden themes, motifs, and messages, powerful performances, and knowledge for participation in a greater discussion about homelessness or the duality of self. But if you are looking to be scared or want a gripping, tension-filled story, this is not the movie for you. While it is competent, the discussion surrounding Us and thinking about what we can learn about ourselves is much more interesting to explore.