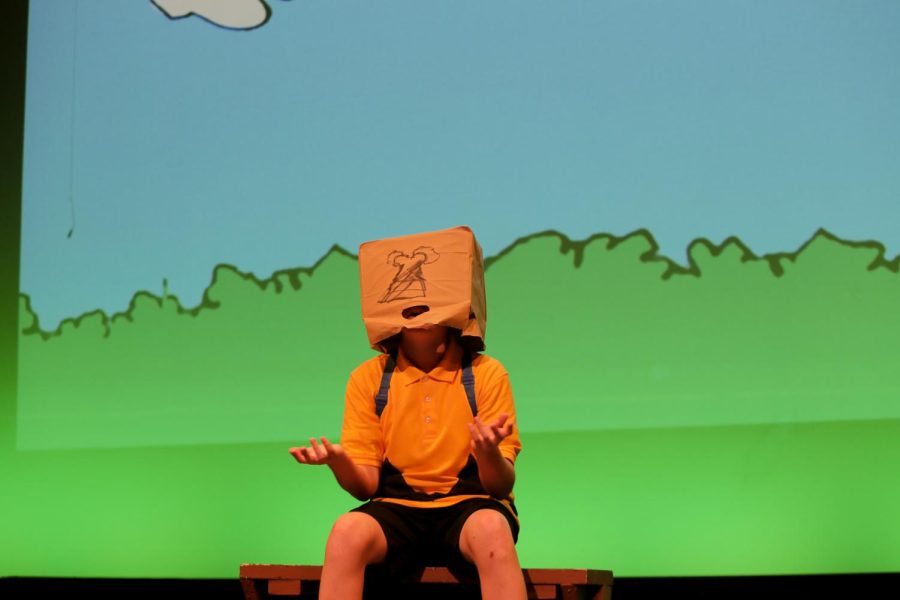 Seventh grader Hunter Lewis plays Charlie Brown during a performance of "You're A Good Man, Charlie Brown," which ran from March 31 to April 3.

However, the production this year faced an unexpected challenge. Director Donna Walker was announced on March 27 as unable to return to school due to a sudden illness that had worsened, rendering her thoroughly bedridden.

“I really was incapable of walking down the hallway in my house, let alone come to work,” Walker said in an email.

As one of the two main directors of plays on campus, Walker had many responsibilities, and her absence left a gap in leadership. In Walker’s sudden absence, stage manager senior Ella Norman and Fine Arts department chair Janine Papin stepped in.

“I think [they told us]… last Sunday, literally the week before tech week, which was kind of stressful,” Norman said. “I had to take over roles I wasn’t used to taking over.”

This production of Charlie Brown was Norman’s 13th Trinity production. She has played nearly every role in a production, including acting, as well as having lights, sound, spotlight, running crew, assistant stage management, and stage management responsibilities.

Norman said she plans to major in stage and production management at Emerson College in Boston and potentially get a master’s in theater education before continuing her career in theater.

“I plan to either work in various theaters, the goal being Broadway or other NYC theaters, as well as potentially teaching theater or technical theater to others,” she said.

To help Norman, Papin stepped in to aid in lights, sounds, costumes, and set pieces.

“Mrs. Papin made it possible for me to watch the rehearsals each day, so I could offer notes, but honestly, rehearsal went so well and the show followed my original vision so well, I could have just given the show to Mrs. Papin and fully trusted her completely,” Walker said in an email.

Surprisingly Walker’s illness did not keep her from contributing to the play. From home, Walker received recordings taken of the day’s rehearsal, and proceeded to write feedback, suggestions and her own ideas that she thought would assist in the production. In this way, Walker was able to help the production that she cared so deeply about.

“I made the analogy in my notes in the program that it was like raising a puppy, and then having the puppy taken away from you- it’s hard to work for so many months creating something, and then not be able to finish it,” Walker said in an email.

Although she wasn’t there in person or in real time, Walker’s suggestions from home, as well as the leadership of Norman and Papin lead to a successful play with few to no mistakes according to Hunter Lewis.

Student Hunter Lewis played Charlie Brown in the play, enjoying his role and the overall play.

“My favorite part of the show was Glee Club because [of] the constant [arguing] and how it all falls apart,” Lewis said.

In the end, the production was a success. According to Papin, the four days on which the play was performed hosted around 500 students, parents, and visitors, raising $1,770 for the Patron of the Arts which is distributed into different disciplines for future use.

“Ms. Walker built wonderful relationships with the students in the cast, and they were eager to make her proud,” Papin said.